Here you will read the most important questions about Haryana Current Gk that are mostly asked in recent Haryana State Exma like HSS, HPSC, HTET and Haryana Police. 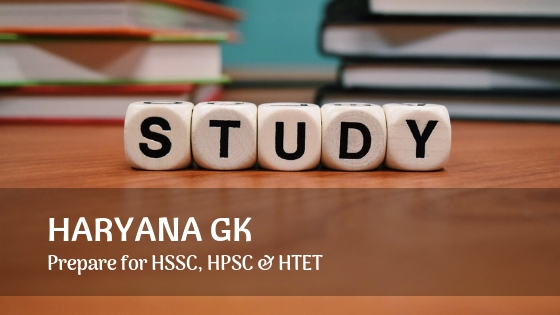 
Q1. How many districts were there when Haryana was formed?   Ans– Seven

Q3. Which is the largest city in population?   Ans– Faridabad

Q5. Which is/are the official languages of Haryana?

Q6. Which district is known as Sripad Janapad?   Ans– Kurukshetra

Q9. Who was the Freedom fighter who later became the CM of the State?   Ans- Ch Devilal

Q10. Which city is not the Part of Panchkula Police Commissionerate?   Ans– Ambala

Q11. Which district is known as Srikantha?   Ans– Kurukshetra

Q12. Who was the ruler of Rewari at the time of Mughal Emperor Akbar?   Ans– Hemchandra ( Hemu )

Q13. In which district has the Ashoka’s Topra Stambha found?   Ans– Ambala

Q14. What is the script of Ashoka Stambha?   Ans– Brahmi

Q15. After whose name was Kurukshetra christened?   Ans– King Kuru

Q16. At which place of District Bhiwani does the Baba Kherewala’s fair take place at Raksha Bandhan?   Ans– Naurangabad

Q19. How many districts were there at the time of Haryana’s Birth?   Ans– Only 7

Q20. Which district of Haryana is known as the Bowl of Rice?   Ans- Karnal

Q21. Who is known as the Architect of Bhakhra Dam?   Ans- Ch Chhotu Ram

Q23. Who was bestowed with the Title of Haryana Kesari?   Ans– Nekiram Sharma

Q27. When did the famous Battle of Panipat between Akbar and Hemu take place?   Ans– In 1556

Q31. Who was the Nawab of Bahadurgarhat the time of 1857 Mutiny?Ans– Mohan Singh

Q39. When were all the villages of the state electrified? Ans- By Nov 1970

Q40. Who has won Bronze in Women Wrestling at Rio Olympic and became the first wrestler to win Olympic Medals and Fourth Women of India to win Medal?   Ans- Sakshi Malik

Q41. Who is the constitutional Head of the State Government?
(A) Governor (B) Chief Minister (C) Chief Justice of India (D) None of the above (Ans:A)

Q42. The chairman of the state public service commission in appointed by—
(A) President (B) Prime Minister (C) Chief Minister (D) Governor (Ans:D)

Q47. Whom among the following has the Governor no right to appoint?
(A) Chief Minister (B) Members of the State Public Service Commission
(C) Judges of the State High Court (D) Advocate General (Ans:C)

Q50. Where is the Headquarters of Mahendargarh district in Haryana?
(A) Narnaul (B) Karnal (C) Kaithal (D) Bhiwani (Ans:A)